Have you ever had that disconcerting feeling that you’re being watched?
A shiver down the spine. A flash of intuition. Someone walking on your grave.
A few days ago, I had exactly this feeling. I was walking through Southampton on the way to an evening language class. The light was beginning to fade and the city’s street lamps were yet to flicker on.
I was walking quickly, my gaze focussed ahead. Suddenly, I was overcome by the sensation that something or someone was watching me. It ground me instantly to a halt. I looked behind me.
At first I saw nothing, but then something caught my attention, a pair of mosaic eyes gazing out at me from the gloom. Relief flooding through me, I took a quick closer look at the cartoon eyes on the wall behind me, before running on to catch my class.
Over the next few weeks, I started to notice mosaics everywhere. A Spider -Man watching me as I ate my lunch in the park, a Bart Simpson grinning at me as I did my food shopping and a Mr Nosey peering at me curiously as I ran through the park.
Deciding that enough was enough, I employed my expert investigation skills and googled ‘mosaics in Southampton’. The mystery was finally solved by a brilliant video from BBC news, about Will Rosie, the ‘guerrilla tiler’ who has been ‘tagging’ the city with his fun and colourful mosaics.
I just had to find out more and so I sent him a message asking for an interview. To my surprise he sent his reply, agreeing to my request, that very same day.

I have something to admit here. While the idea of interviewing someone in person makes me a little nervous, the idea of interviewing someone by telephone completely terrifies me. I’m the kind of person who will go out of their way to avoid phone calls and I’d happily compose a 30-paragraph email rather than pick up the phone.
When I messaged Will, I’d kind of had the idea that I would send him a list of questions by email and he’d write up his reply. Easy, I thought. No awkward silence. No butterflies in the stomach. No worrying that the signal would drop out.
Unfortunately, Will had other ideas. As a busy man, he thought it made much more sense for me to give him a ring, as he could put me on loud speaker and continue making his mosaics as we talked. As I had a pretty bad cold and a sore throat at the time, I decided that I could put it off for at least a week.
Unfortunately, that week rolled around quickly and it soon came to the time that I had agreed to speak to him. With my palms sweating and heart pounding, I grabbed the list of questions that I had meticulously prepared (so as to avoid the dreaded awkward silences) and found myself a quiet room to conduct the interview.
As it turned out, all my worries had been completely unfounded. From the moment Will answered the phone, his chatty, friendly and down-to-earth demeanour put me completely at ease.
My list of questions lay discarded as I desperately tried to scribble down all his fun anecdotes and meanderings, as he described his successful venture into the world of mosaic making and the many adventures he’d had along the way. 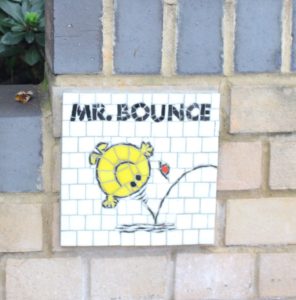 Following our introductions, Will’s first few words are to set the scene for me. As we speak, he is in the midst of making a 2½ x 1 metre mosaic for the City of Sanctuary Southampton, which is a charity that helps refugees and asylum seekers living in Southampton.
This leads on to my first question, which is if mosaic making is just a hobby or a career for Will. He tells me that mosaic and mural making is a full-time job for him. He receives commissions from community groups, companies and individuals. One day he might be working with a youth group to liven up a community centre, the next breaking a Guinness World Record for the largest coin mosaic with Old Mutual Wealth.
One of Will’s more exciting jobs was one for Disney. He received a phone call from Disney’s European construction manager, who’d seen some of his work in the town of Lymington. Will spent a very stressful two-week family holiday in Ireland completing the project before being sent to Rome to install it.
Will tells me that the making of the mosaics is pretty time-intensive but he often invites people along to help him out. He has also started running mosaic classes, in which anyone can come along and try their hand at making them.
In one of the frequent side tracks that permeate my interview with Will, he tells me of his side work as a funeral officiant. Amused by the idea of these two distinctly separate lines of work coinciding, I encouraged him to tell me more.
He apparently fell into the work by chance, after agreeing to it as a one-off thing for a family member. He discovered that he was both pretty good at it, and that he found the work very fulfilling. After successfully officiating the first ceremony, he started getting requests from other people asking him to do funerals for them too.
From my short conversation with Will, I can completely understand why someone would want him to officiate a funeral for them.
As well as having the knowledge from his theology studies at Bible college, he’s also funny and chatty and exactly the kind of person you’d want to talk to on such a difficult day. He unsurprisingly can’t help but throw a pun into our conversation about it being a bit of a ‘dead-end job’.

Getting into mosaic making

Will Rosie’s entry into the world of mosaic making seemed to be as random as that into funeral officiating. Alongside theology, he’d also studied youth work.
Back in 2007, one of the youth charities he worked with ran out of money. At the same time, another community group he knew had recently been given a large grant for a mosaic. Will decided to kill two birds with one stone and offered for free his services as a mosaic maker to help raise the funds for the youth group.
At this point, Will had never made a mosaic in his life. Being a pretty creative and practical person, however, he decided that it couldn’t be too hard to learn.
He got in touch with some experts and watched a few YouTube videos. Eventually, he’d accumulated enough knowledge to have a fairly good idea of what materials he needed and to have a good go at mosaic making.
He made the mosaics as part of a community training project. This meant he’d teach members of the community group how to make the mosaics, so that the end result would be their own work. This way, if they turned out badly, the community would still benefit in some way from them. Fortunately, the project was a huge success and they managed to create five amazing mosaics, each almost two metres high.
The success of this venture encouraged him to run the mosaic project with other groups. His work with youth groups meant that he knew how to fill out the tricky funding forms to secure them the money. He would then work with the groups, teaching them the skills they needed to create and install the mosaics.

From Rhinos to Superheroes

Back in 2013, a trail of rhino sculptures was placed in various locations around Southampton as part of a project to raise awareness of the conservation work done by the Marwell Wildlife charity.
The rhinos were decorated by local artists, schools and community groups. One of these 36 sculptures was a mosaic rhino, courtesy of Will Rosie.
Eventually, these Rhinos were auctioned off to raise money for charity. Will’s rhino was sold to the bass player from the band Status Quo.
Although he understands why they were sold, Will thought that it was a shame that these sculptures, which had brought a smile to the people of Southampton, were now sitting in the gardens of rich people. With this in mind, Will decided to bring back that smile to people in the community by giving them something a bit more permanent.
Will has been making and installing his own mosaics all around the city for a few years now. He started with just a few pairs of mosaic eyes, but before long had branched out into Mr Men characters, superheroes and members of the Simpson family. There are now around 30 small mosaics dotted around the city.
The designs are all fun and simple, which means he only needs to dedicate an hour a night to creating them. There is no particular trail for them, but Will posts up clues as to where they are on his Instagram account.

In this modern world of information overload and endless stress, days can seem to roll one into another as we try to fulfil a never ending list of commitments and responsibilities. It is easy to lose sight of what makes life fun, joyful and meaningful.
So the next time you’re rushing along to work or running to make an appointment, just take a moment to stop and look up and you too might spot something that will bring a smile to your face or a moment of silliness to your day.