BOOK YOUR COURSE
ASK A QUESTION

All levels of English

Enroll for 1 to 4 weeks.
Start any week.

Our English & Football programme offers you an exciting combination of professional football coaching, English lessons, trips, stadium visits and other activities.Each week you will have football training sessions, an interactive seminar on sports science and a friendly match against either a mixed nationality team or local British school team.

* The age range is 11-17. However, we may occasionally accept a younger or older student from the same school year as someone else in the group.

15 hours of lessons per week

(*) The maximum number of students per class is generally 15. However, at peak times, we reserve the right to increase this to 18 per class.

Lessons are enjoyable and fast-paced, and are designed to build your confidence with spoken English. Our syllabus is specially designed for students aged 11-17. Topics and language points change on a weekly basis, meaning you can start and finish your course any week. Classwork also links with trips and other cultural activities on your programme. Lessons alternate between morning and afternoon on a weekly basis in Southampton and Reading.

15 hours of sports activities/coaching per week

During the training sessions, you will have the opportunity to understand the game as well as to improve your performance through fitness sessions, analytic exercises and matches. Once a week you will play in a friendly match. During training we will focus on learning some tactics you might be able to put into practice during matches.

Aims of the Football Camp:

To develop your football skills

To improve your tactical awareness

To develop your football vocabulary in English

To build your knowledge of sports psychology, fitness and fair play

The timetable below is a sample:

* English lessons may be in the morning or in the afternoon. This alternates on a weekly basis. Students in homestay accommodation (**) spend Sunday and four evenings per week with their host. Residential accommodation is available from 7 July

(**) Homestay accommodation only available  in Southampton.

Creativity  to turn  your  potential  into  excellence,  through  fun  and  engaging  sessions  aimed  at  improving  your  techniques and performance. You will also have to chance to play matches against mixed nationality and local British teams. Training will take place at Goals Southampton.
The programme is delivered by a professional coach, ex player and expert in Sports Science.  The programme includes:

The Football Coach
in Reading

The Football Coach
in Southampton

I played at a high level of football since the age of 12, representing the City of Sheffield, Barnsley FC and Leeds United FC up until the age of 17.  I then moved into playing Semi-Professional football for Sheffield FC (The Oldest Football Club in the World), Worksop Town and Gainsborough Trinity whilst continuing to coach the junior teams at Sheffield Wednesday FC and also managing and coaching in their soccer camps.  I have had the privilege of coaching with a number of ex-international players and playing under their management.

At Sheffield Hallam University, I was the player/coach for the first team that won the British Universities Championship in 1992. I have coached in the USA for clubs including Memphis FC and managed soccer camps for Great Britain Buckeye Soccer Clinics in Ohio and Pennsylvania.

I am currently coaching at Laurel Park Junior Football Club that caters for over 350 male and female players, spanning over 30 teams. I was the Football Development Officer for a number of years and also ran my own soccer camps throughout the school holidays including team groups and individual, one-to-one coaching.  I am a member of the FA Licensed Coaches Club and regularly attend conferences throughout the year in order to increase my awareness and experience of the newest coaching methods and ideas.

My coaching approach is holistic where I focus on individual children’s ability and skills to immerse them fully into the game to improve their football and social skills.

English & Football  – supplementary fee of GBP 100 per week applies.
This fee will need to be added to the cost of a Classic Programme.
Optional stadium visits – additional fee of approx. £15-£25 depending on trip
(some full-day & half-day trips may offer the opportunity for stadium tours – more details soon)

The English + Football camp is available in

Evening activities as per centre timetable

On our fun-filled activities programme you will discover some of the top tourist destinations in the UK, such as London, Oxford and Bath (see your centre timetable for trip destinations). You will also take part in a wide variety of other activities such as discos, parties, sports and creative workshops. Many have a learning element and all are designed to help you make friends and activate your English. 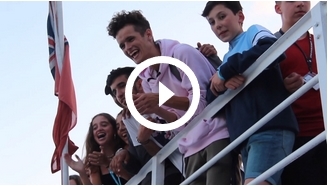 Lewis School of English © 2020 All Rights Reserved - Powered by Takeabyte