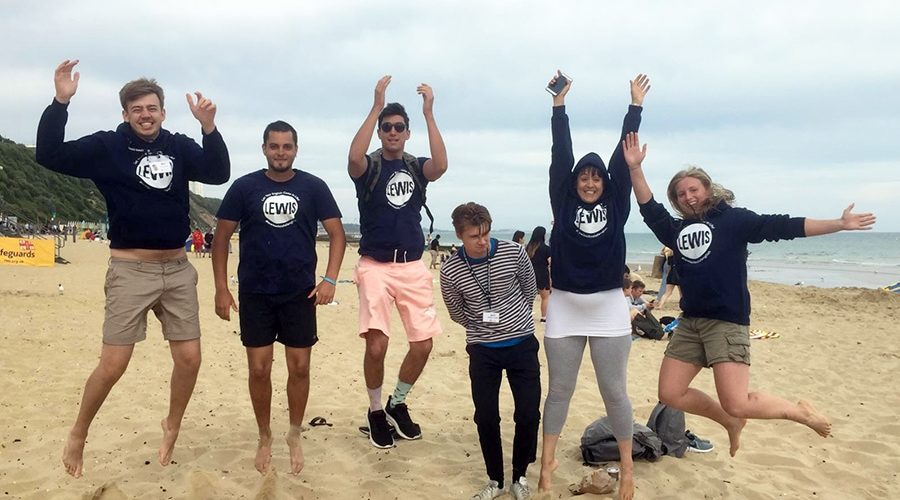 You know that sinking feeling you get on a Sunday evening?
It starts to niggle at you somewhere around 6pm at the end of every weekend, only to grow into a grey, dragging gloom which follows you on your way to work and only dissipates with a strong cup of coffee and a slice of cake somewhere mid-week.
Having worked in a variety of dull, unrewarding jobs, I’m well used to that feeling.
This summer, however, I found the perfect antidote to that unpleasant sensation. Instead of the well-accustomed drudgery, each day of my summer was varied, exciting and challenging.
Are you intrigued? Do you want to know more? Then read on to find out more about the life of an activity leader at the Lewis School of English.

What is an Activity Leader?

An activity leader plays an essential role in the running of the Lewis School of English summer junior programmes. Each year, hundreds of teenagers from around the globe descend on Southampton, all of them looking to improve their English, make some new friends and have fun. In addition to their three hours a day of English lessons, they have a full programme of trips and activities. The activity leader’s job is to deliver this programme and keep the teenagers safe, happy and engaged whilst doing so.
The Southampton Junior Centre runs from the end of June to early August (there are other centres in Reading, Guildford and the New Forest). Some staff, like me, stayed for the whole period; others for just a month. Our team was made up of an international mix of British, Greek, Spanish, Dutch and French people. The activity leaders who didn’t live locally stayed in residential accommodation and helped with this part of the programme, taking students to breakfast in the morning and carrying out night duty.
We worked 48 hours a week, with one day off. Days varied from 12 hours for full-day trips to just a morning or an afternoon leading activities. Although it was challenging working such long days, it did mean that we got to know each other quickly and formed a tight-knit group. This was even more so for the residential staff, who lived together as well as working together. Having such a mix of nationalities and personalities kept things interesting and provided us with a great opportunity to learn more about each other’s cultures.

You might be wondering what kind of activities we ran as activity leaders. The answer would be a little bit of everything. In the daytime, students who opted for the Classic Programme had a varied schedule of science, debate, team building, drama, soft skills and sport. The students would have lessons in either the morning or afternoon, and a further two sessions of activities. Each activity leader had certain workshops which they were responsible for organising. My main activities were debate and team building, but I also supported the running of the other workshops.

Watch now our summer highlights video and don’t forget to like and subscribe to the Lewis School of English Channel ! 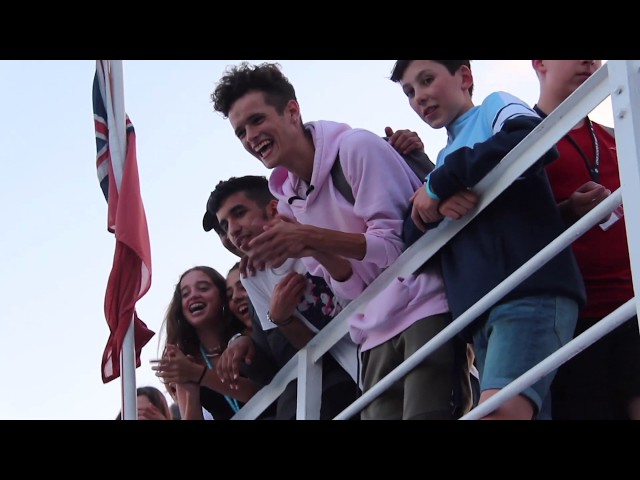 Team building was one of my favourite activities to prepare. I enjoyed devising different challenges for the students to undertake in groups and then sending a bizarre list of materials for my activities manager to collect. When dividing the teenagers into groups, I made sure there was a good mix of nationalities. Watching students get creative and use their English skills to devise ways of protecting an egg from dropping from the top of a building and how to make the tallest spaghetti-marshmallow towers was always entertaining.
Debate was always a more challenging task, as the groups are mixed in age and ability for activities, and often after three hours of English lessons, the students were a little resistant to anything that resembled school work. I therefore made an effort to make it as light and engaging as possible. I tried out a range of ideas including a classic balloon debate, games of ‘Mafia’ (also known as ‘Werewolf’) and one of my personal favourites, a ‘Survive the Zombie Apocalypse’ debate. Working in small groups, the students had to create a character, decide on their team leader and then choose from a list of weapons and random items, such as medical kits and rope. Based on all these factors, they then had to create a zombie apocalypse survival plan and we’d then debate which team was most likely to survive. After all that, there was still time for a quick zombie-themed wide game to get everyone moving.
For many students, sports was the most popular activity. The sports sessions were held in Solent University’s sports hall, just down the road from the school. We would usually organise the students into teams and play a variety of games such as football, netball, basketball and benchball. However, the most popular session of the summer happened when we gave the students free rein to decide what they wanted to do. The brilliant staff at Solent University helped the teenagers pick out whatever sports equipment they desired. Some kicked a ball around, others shot hoops, we often had two games of badminton going and a group played skipping games in the corner. I was challenged to a running race against a girl from Saudi Arabia, which I sadly lost.  At one point, one of the girls convinced the Solent staff to let us take over the sound system and students took turns putting in their song requests. I loved the joy and excitement that a simple sports hall and some equipment could create.Icebreakers, Boat Parties and Discos
The students also had evening activities. These varied from week to week, but included boat parties, discos at a local club, movie evenings, bowling, icebreaker games, a mini Olympics, international dance evenings and a barbecue.
One of my first challenges as an activity leader was to plan icebreaker games as an evening activity for over 100 students. We have a handbook of activity ideas and we’re welcome to suggest ideas of our own, but it was still quite a daunting challenge! Fortunately, we had beautiful weather and easy access to the city centre parks, which are just in front of the main Lewis School building. I took some of my favourite activities from my time in the Scouts, including Splat, Zip Zap Boing, Bulldog and Ninja, and explained one game to each of the Activity Leaders running the session with me. We created four bases around the park and divided the students into four groups. Each group had 15 minutes doing each activity and then swapped. The activity was a resounding success. It was enjoyable watching the teenagers, some of whom were tired from a busy day, come back to life and get active and competitive.
My favourite evening activities were the international dance evenings organised by a brilliant activity leader from Greece. During the day, the students had the chance to prepare a dance or song from their country. In the evening, we went to the sports hall with 200 students. The evening was electric and alive. We had dance performances from the United Arab Emirates, Spain, China, Hungary, Greece, Turkey and Italy. After the groups had performed their dance, everyone would get up and join in. For staff and students alike, it was amazing to have the opportunity to experience a part of so many different cultures.

In addition to the lessons and activities, the summer programme included one full-day trip and one half-day trip each week. This was where Southampton’s amazing location really came in to play. Over the summer, we ran trips to London, Oxford, Winchester, Bournemouth, Bath, Portsmouth, the Isle of Wight and Stonehenge. Within Southampton, we did the historic Walk the Walls tour and visited the brilliant Sea City and Tudor House museums.
For many students, the highlight was the trip to London, which we did once a week throughout the whole summer school. The classic trip to London involved a boat cruise on the Thames, a walking tour of the major attractions such as Big Ben, Buckingham Palace and Trafalgar Square, followed by some free time at Covent Garden. One of the more memorable trips for me, however, was an extra trip I led with a small group of older teenagers who’d been at Lewis School for a few weeks and had therefore already done all the classic trips. Armed with a London travel pass, my group, which was composed of two brothers from the UAE, a Greek, an Omani and two Italians, succeeded in navigating the London underground and making our way around London. In the morning, we explored the many unique stalls and sampled the exotic food at Camden Market before heading to Oxford Street for some shopping. The group were funny, kind and always on time to the meeting points after their free time.
Another favourite was to the Isle of Wight with a lovely group from Italy. We took a ferry from Southampton and spent the hour crossing relaxing in the sunshine out on deck. Our first stop on the island was the majestic Osborne house, which was the holiday home of Queen Victoria and her husband, Prince Albert. We spent a couple of hours exploring the house and the beautiful grounds, complete with its private beach. Next, we took the chain ferry over the Medina River to the town of Cowes. There, we spent the rest of the day sunbathing on the beach, swimming in the sea and exploring the town’s boutique shops, before heading back to Southampton.

The life of an activity leader was exciting, interesting and fun. As someone who’s just moved to the area, I really enjoyed the opportunity to truly get to know Southampton and all its surrounding cities. I loved using my creativity to plan the activities, and working with such large groups of young people greatly improved my confidence. The best thing, though, was being able to learn about so many different cultures and countries all in one place.
So perhaps, if you’re looking to escape the drudgery of working 9-5 next summer and to instead gain a truly international experience, then the Lewis School of English might be the place to look!

The Outsider’s Guide to Southampton

The Sikh Saviours of Southampton