Sibylle – the Whizz-Kid from Switzerland 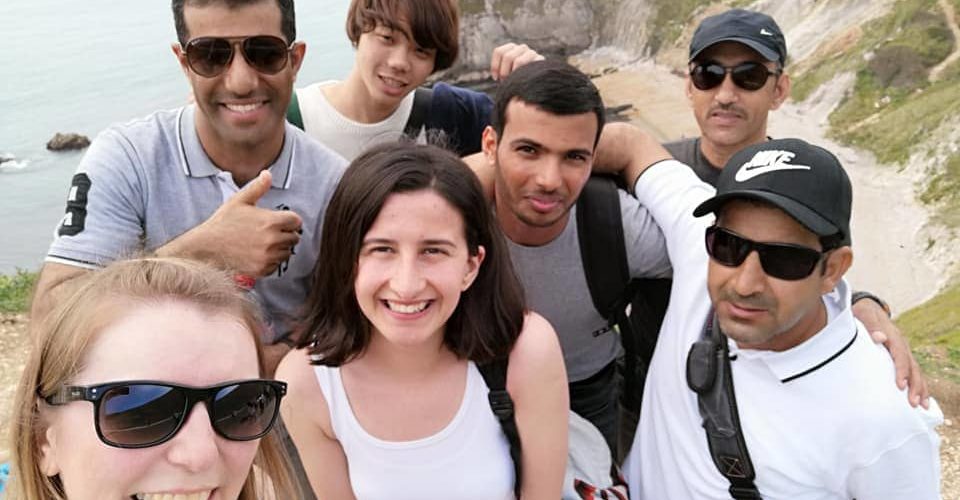 Sibylle – the Whizz-Kid from Switzerland

Sibylle looks very much like your typical teenager. She’s dressed in a hoody, jeans and a pair of trainers. She knocks tentatively on my office door and shyly introduces herself.
Sibylle has agreed to be my first interviewee. I’d been playing with the idea of creating a series of articles about our students here at the Lewis School of English for a little while.
I’d overheard snippets of conversation from Sibylle’s teachers, which had caught my interest. I decided that this teenager with impeccable English, who studies in a bilingual class in Switzerland and has decided to spend her two-week school holidays improving her English at the Lewis School, would be an ideal first candidate for these articles.
This turned out to be a very good choice, as my interview with Sibylle was one of the most interesting conversations that I’ve had for a very long time.

When talking to Sibylle, the first thing you notice is just how good her English really is. She speaks with near-perfect grammar and only a hint of an accent. I know a fair few native speakers who still haven’t quite mastered the language to the extent that she has.
This of course, piqued my curiosity as to what she was hoping to gain from her two weeks at the Lewis School of English.
Sibylle explains that she is in a bilingual class at her school. This means that almost all of her subjects are taught in English. She’s therefore hoping to hone her English essay-writing skills, particularly for subjects like history.
I’m intrigued by the idea of a bilingual class. I remember school being difficult enough even in my first language but according to Sibylle, 23 students at her school have decided to make it that little bit harder.
I wonder aloud whether the students have chosen this themselves or if it’s something that is encouraged by the parents. Sibylle explains that it’s very much her own decision and that she revels in the challenge. She also thinks it might be useful for university, as in some Swiss universities, certain courses are taught in English.

Sibylle is from a small village in the north of Switzerland. It has a population of around 3,000 people but isn’t too isolated as it is just a short distance from the largest city in Switzerland, Zürich.
When asked to describe her village, Sibylle’s first and emphatic response is SMALL! When pushed for a little more information, she adds that there are a lot of cats there and that it’s pretty traditional (although she makes sure to say this is not necessarily a bad thing).
She doesn’t seem to be too enthusiastic about her hometown, but as someone who also grew up in a small village myself, I completely understand. Something that can seem quaint and friendly to an adult can often seem uneventful and restrictive for a teenager, especially one with such high aspirations.
Southampton, in comparison, seems pretty big to Sibylle. She enthusiastically describes it as “a very cool city”. She also likes the fact that it’s such a diverse city. Her only complaints are about the weather, which in fairness has been awful for most of her stay, and the tap water, which she says is nowhere near as good as the fresh Swiss mountain water that she’s used to.
For her two-week stay, Sibylle is living with a homestay host in Southampton. She has nothing but positive things to say about the couple she’s living with. They are lovely, welcoming and make her endless amounts of food, which she understandably loves. Sibylle also appreciates the fact that the house is very typically English with its red-brick design and quaint garden.

From just a short conversation with Sibylle, it becomes quickly apparent that she’s very intelligent. This impression is further reinforced when hearing about her plans for the future.
She has wanted to be a surgeon since she was small and works hard to make sure that this dream becomes a reality. If it doesn’t work out though, she also wouldn’t mind working in a laboratory. Although she’s looking to go in a scientific direction, her favourite subject is actually history.
When she isn’t studying, Sibylle attends a Kung Fu class in a neighbouring town. She’s been doing the sport for over nine years now and is at grade 9 (out of 12). She loves Kung Fu as it is more than just a martial art; it’s also a philosophy and a way of life. Sibylle also enjoys singing and is in a choir.
I also asked Sybille how she would describe herself.  This question seemed to throw her a bit. In fairness to her, no one really likes that question.
After a moment’s thought, she tells me she likes to think. I ask about what and she says, “About everything.” She also tells me that although she finds change difficult, she tries to be open to new things. I think that as she is spending two weeks studying in a new country, without her family, she’s doing very well with this intention.

Sibylle is currently in her second of two weeks at the Lewis School. She says that she has really enjoyed her time here so far. She loves the level of interaction between the teachers and the students, as well as the fact that the teachers aren’t bound by books.
The Lewis School encourage all their teachers to create their own teaching materials and activities in an effort to keep the content up-to date and so that the teaching can be tailored to the students.
This has obviously been of benefit to Sibylle, as she feels that she’s been challenged during her studies here, which for someone who thrives on a challenge is definitely a positive thing.

As we wrap up the interview and Sibylle heads off to buy a pack of salted caramel M&M’s for a friend back home (apparently they don’t have them in Switzerland), I reflect on how happy I am to work at the Lewis School.
Working in such an international environment means that I get the opportunity to meet so many interesting and amazing people from all over the world.
From our interview, I feel like I have a fascinating snapshot of the life of teenager from a small village in Switzerland. Another day I might talk to a young mother from Saudi Arabia, a teacher from Italy or a pair of twins from Macau.
These small windows into life in other countries keep my work interesting and it’s these small windows that I wish to share with you, the reader, so that you can take a quick peek through them yourself.

The Sikh Saviours of Southampton