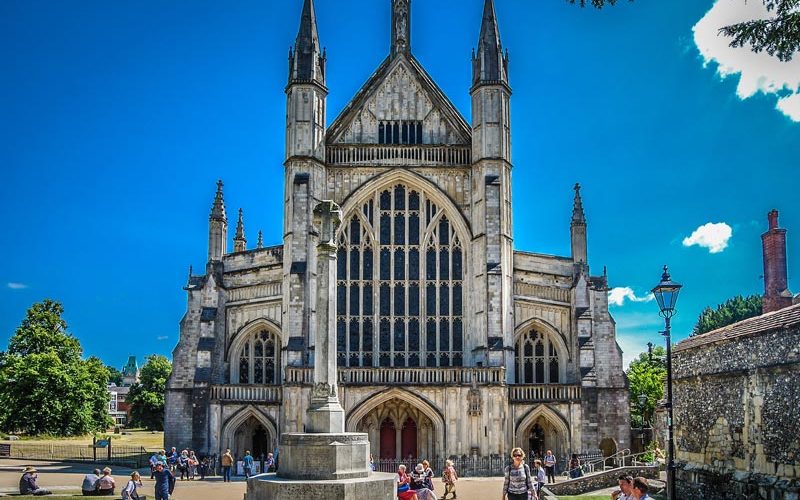 Winchester is a stunning medieval city

Winchester is a small, beautiful, historic city that was the capital of England during the 10th and early 11th centuries.
From world class attractions and architecture, unrivaled shopping and delicious dining, to countryside trails for walking and cycling – there’s plenty to do in and around Winchester.

This was built in the 11th century, shortly after the Norman invasion of England.
As for ancient constructions, the city is dominated by the imposing spire of Winchester Cathedral.
It’s one of the largest cathedrals in Europe, with a stunning nave. In the north aisle of the nave you’ll find the grave of Jane Austen, one of the most enduringly popular literary figures in British history.

The Great Hall is the only surviving part of the old Winchester Castle. It was rebuilt in the 13th century and still exists in this form.
It is best known for the Round Table, which has hung in the hall for over 700 years. According to myth, the wizard Merlin created the original Round Table for King Arthur.
This is an imitation believed to be made in the 13th century for Edward 1, who was interested in the legend of King Arthur. Henry VIII had it painted in 1522 to show himself sitting in King Arthur’s seat.
The names of the legendary Knights of the Round Table are written around the edge of the table.
A small but pretty medieval garden, Queen Eleanor’s Garden, is next to the Great Hall.

The Winchester College is the oldest continuously running school in the country. The college has been used as a location to film a number of blockbusters such as Harry Potter and Les Misérables. The college offers tours of it’s historical buildings and fascinating grounds.

The Winchester City Mill is a restored water mill situated on the River Itchen in the centre of the ancient English city of Winchester. The mill is owned by the National Trust.

Located in the heart of the historic city of Winchester, City Museum tells the story of England’s ancient capital, the seat of Alfred the Great.
There are plenty of hands‑on activities for all the family to enjoy during your visit.

The museum tells the story of this remarkable building, and the history of Tudor and Stuart Winchester. It also offers great rooftop city views.

Situated on the historic site of Peninsula Barracks, next to the Great Hall, no visit to Winchester would be complete without visiting Winchester’s Military Museums.
A unique site with six military museums, there is plenty to see and do and with the delightful Copper Joe’s Café located on-site, this is the perfect day out for all the family.

The medieval Bishops of Winchester were rich and powerful men, the relations and advisers of kings. Wolvesey Castle, standing a stone’s throw from Winchester Cathedral, was their main residence throughout the Middle Ages.

Nestling in the water meadows alongside the River Itchen and in the shadow of St Catherine’s Hill lies the ancient Hospital of St Cross. Reknowned for the tranquillity of its setting and the beauty of its architecture, the Hospital is one of England’s oldest continuing almshouses.

Perhaps the most important person in Winchester’s history was King Alfred. He was a Saxon king, and established Winchester as the capital of the ancient kingdom of Wessex in the year 827.

Winchester has a jammed pack programme of events throughout the year. The summer season is full of festivals, markets and family friendly events. At Christmas the city comes alive with festive cheer, boasting one of the UK’s best Christmas Markets.

Winchester Cathedral’s Christmas Market is recognised as one of the best Christmas Markets in Europe because of its unique location, high quality exhibitors and bustling atmosphere.

Hat Fair is the UK’s longest continually running festival of outdoor arts. Founded in 1974 by Jonathan Kay, Hat Fair inspires and is inspired by the people, heritage and public spaces within the city of Winchester.

Surrounding Winchester are a number of towns and village all offering excellent events throughout the year.
On the third Sunday of May each year, Alresford becomes the site of a huge street festival. Over 80 stalls showcase the very best local food and drink producers. Others sell arts, crafts, jewellery and clothing, items for house, garden and much else besides.

Where is Winchester, England, U.K.?

Welcome to Bristol, a modern European city with an historic past